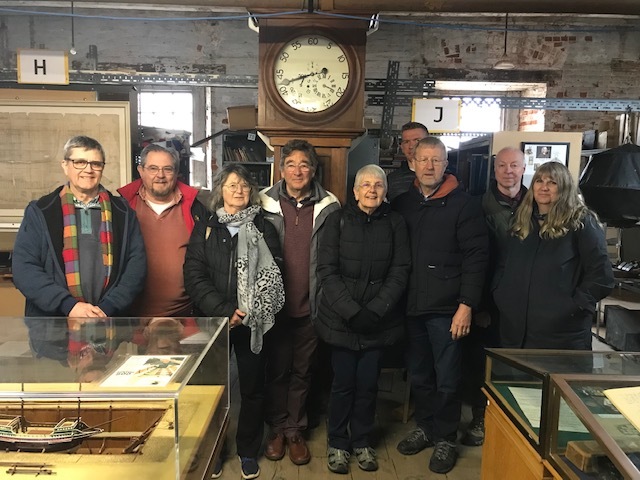 Saturday morning, bright but distinctly chilly for April.  There should have been eighteen of us, but after a week of ill-health cancellations, mainly due to Covid, it was nine HYC members who arrived at the Dock Gates to be greeted by members of the Portsmouth Royal Dockyard Historical Trust.

We were welcomed by the Chairman, Nigel Linger, and promised a tour with people who had worked in the dockyard in various trades.  Graham, a former shipwright, showed us around the Dockyard Apprentice Exhibition, explaining about the training that apprentices would have had in the use of the tools that were employed at a time when hand crafting was often the order of the day.  We learned about the carpenters, joiners, caulkers, founders, blacksmiths, block makers, pattern makers, rope makers, flag makers and we heard from a former sailmaker all trades requiring a seven-year apprenticeship.  Each apprentice was expected to make an apprentice piece to pass their final test.  The ones that we saw demonstrated exceptional skill and quality.

After lunch in the café, Nigel reminded us that we were touching history.  Some of the Georgian buildings had been there when Admiral Horatio Nelson came by on his way to board Victory to engage in the Battle of Trafalgar in 1805.  We were told the story of Jack the Painter, who, in 1776, set fire to the Great Double Rope House.  He had returned from America determined to bring an act of destruction to the Royal Dockyard as a means, in his mind, of aiding the American War of Independence.  He later hung for his crime in the dockyard, and the Rope House was rebuilt.

We moved on to tour the Trusts private archive of historic objects, images and letters, again with Nigel explaining the back stories and giving us a wealth of information.  Many of these items related to more modern times.  We heard about the Triangle Girls who worked in the Dockyard when some of the men went off to the First World War.  They were called that because they were given triangular badges bearing the words On War Service, which they wore with pride.  Despite the lack of proper safety equipment, they worked the heavy machinery, drilling and welding to support the war effort.  After the war, they were not allowed to continue working and had to return to their ordinary civilian lives.

There is a wealth of information on the Portsmouth Royal Dockyard Historical Trust website. Information and artefacts, particularly from former Dockyard workers are welcomed.  The HYC members on the tour thanked the volunteers for the amazing insight that they had generously given us and gave a donation to the Trust.

For more pictures of the Dockyard visit, see the gallery.