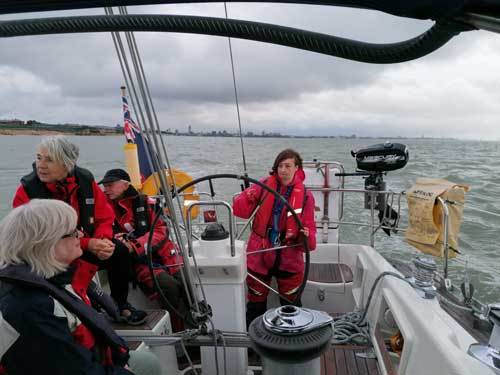 There and back again, a novice Sailor's tale.

A journey through Middle Solent.

The weekend started for us on Friday Afternoon, and the weather on the way down to Gosport didn't bode well for the rest of the Weekend.
Rain of Biblical proportions some of the way, dark skies all the way.

Made our way down to 'Blue Moon' with our seven or eight bags of gear! It was just a weekend trip wasn't it?

Spent the night on-board, Val and I in the Aft Cabin, Lizzy on the Sofa.

Rained on and off during the night, and we awoke to more dark skies, but Jonathan reported there was a brief 'window' in the weather, that should coincide with our departure time.

Honourary Deckhand Lizzy had a go at the Helm, and did quite well, her first proper experience of Sailing.

Sea was fairly rough, but we enjoyed every minute, a real Roller-Coaster ride, but with added Log-Flume water effects, even though we managed to avoid all the rain-showers en-route.

Managed to lose my Cap overboard about half-way to Lymington, which the Skipper (Jonathan)took to be a signal to initiate an impromptu MOB Drill!
We circled it a few times until it was finally lost to the deep!

Got into Lymington Harbour at around 1400-ish, and took a late-lunch.

Then strolled into Town, just in time to catch the Market Stalls packing-up.

'Pontoon Party' aboard 'Misty Moon' at around 1830, then off to the Sailing Club Restaurant for the Rally Dinner.
Food was nice, but there must have been a localised vegetable shortage in town . . .

Saturday night was another on-off affair with the rain, but we all slept fairly well.

The return journey started off with a brief shower, but it didn't last, and the rest of the trip back to Haslar was dry, again.

Sunday morning of course, was the start of the Fastnet Race, we could see the myriad Masts from a long way off, as Celeste did an excellent job of keeping the Sails filled. Not an easy job by the look of it, with the wind almost directly astern.

We were making good progress, making about the same Knots as the day before, but going in a straight line for a change!

As we got closer, we started to make out individual Boats.

I was wondering when we were going to alter course, because we surely weren't going to just continue on our heading, were we?

That would take us right through the middle of the thronged masses!!
But we did! Jonathan explained we had the same right to be there as they did, but I was still expecting some red-faced Race Official to come tearing up in a Rib and ask us WHAT THE BL**DY HELL WE THOUGHT WE WERE DOING? . . . but no-one did.

We just sailed right on through the pack, occasionally having to alter course slightly to avoid getting mowed down, but it was surprisingly easy to thread our way through, thanks to Jonathan's experience (and our eight extra eyes!).

Managed to get into one of the online videos covering the Race start, as we crossed the Start Line about a minute before the first Boats set off.

The rest of the journey seemed pretty uneventful after that, but it was a very enjoyable trip.

We had one more bit of excitement at the end, just as we were entering the Harbour, we got hit by a few minutes of 30+knot gusts, made it quite interesting!

Our sincere thanks to the organiser(s), hopefully we'll get to do it again sometime . . .

To see more pictures of this event look in the photo gallery.